The CABA – Beijing Club was recently established in Beijing to better serve CABA members who in recent years moved from the US to the Beijing area. 20 CABA members and guests attended the commencement meeting on April 12, 2011 in Beijing while CABA leader Drs. Yihan Wang, Chaoyang Dai, Zhao-Kui Wan, and Zhihong Chen participated in the live teleconference from Boston.

As a natural extension of the CABA organization, the CABA – Beijing club adheres to the missions of CABA to serve as a platform for our members in the Beijing area to meet their career development and professional networking needs and as a bridge to connect biomedical research, development, and business in the Beijing area and the US and other areas of China. The Club is under the leadership of CABA Board and its Executive Committee.

The CABA – Beijing Club members include Yueming Wang of Beijing Tide Pharmaceuticals, Eric Zhang of Beijing PharmacSciences, Lixin Jiang of Staidson (Beijing) Pharmaceutical Co. Ltd. and other “returnees” from the US. The club will host meetings, workshops, and social events to facilitate interactions among CABA members in Beijing. China clubs in other major biomedical hubs of China will be established accordingly. 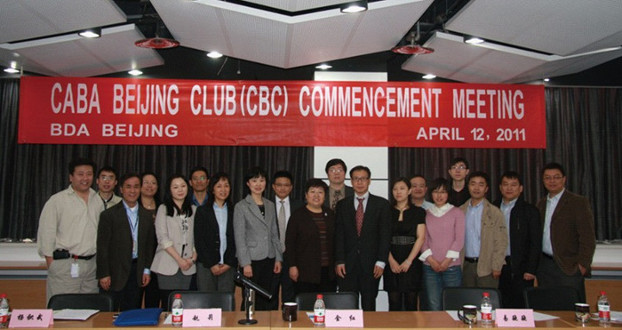